Amnesty International has again demanded that pro-independence activists Jordi Cuixart and Jordi Sànchez be released. The NGO sent a technical report (in Spanish) on the case to all sides in the Catalan Trial – public prosecutor, solicitor general, defenses and private prosecutor – as well as regional and international human rights groups, as made public on Wednesday. In the paper, the organization casts doubt on whether the 9-year prison sentence for each of the leading activists complies with international human rights law.

Cuixart and Sànchez were sentenced for their involvement in protests leading up to the October 1, 2017 referendum, especially for leading a rally outside Catalonia’s economy ministry on September 20, 2017, while the building was being raided by Spain’s police in an effort to dismantle the referendum. While Sànchez and Cuixart stood on a police car to call off the protest, there were no people injured or arrested during the event. The Supreme Court convicted them to nine years behind bars for sedition in October 2019.

“Excluding the events attributed to Cuixart and Sànchez from the freedom of peaceful assembly, the Supreme Court ignored its obligation to analyze the events according to the legality, legitimate finality, necessity and proportionality criteria, as international human rights law demands,” reads the report. Amnesty International has been asking for their freedom ever since they were sent to precautionary detention on October 16, 2017, until their verdict was out two years later, when they began to serve their conviction.

Freedom of expression and peaceful assembly

AI thinks that the sentence represents a restriction of the freedom of expression and right to peaceful assembly that does not comply with the restrictions accepted by Article 21 of the International Covenant on Civil and Political Rights and Article 11.2 of the European Convention on Human Rights.

For the human rights group, the crime of sedition in Spain is “vague” and “against the principle of legality.” Besides, they believe that the sentence opens the door to enabling authorities to impose a maximum number of people who can simultaneously exercise their peaceful right to protest.

“It is the criminalization of a wide range of actions closely linked to the exercising of the freedom of speech and freedom of peaceful assembly, as well as civil disobedience or obstructive protest.” The NGO’s head in Catalonia, Adriana Ribas, added that the sentence “criminalized legitimate protest acts.” 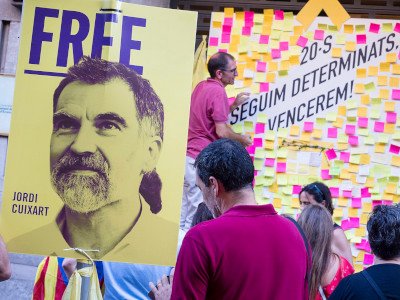